I have had a FitBit Ultra for a couple of months.  It is rather addictive to watch the number of steps taken and floors climbed.  It is also compelling to get in just one more floor and the next floor badge for the day.  There are a few technology challenges for me though...

*It requires Windows or OSX to setup the device and to sync the device.  Neither of these generally reside in my house and they definitively do not travel with me.
*The ultra syncs wirelessly to the usb base attached to a machine running the fitbit software - again Windows or OSX - which uploads the data to the server.
*The information can be viewed from any web browser and also from the IOS and Android apps.

The newest FitBit products include bluetooth 4.0 direct syncing support and I cannot wait for mine!  But meanwhile...

I want to sync through my Linux box.  After some investigation I found a couple of projects to support this.  The software cannot yet setup a device but it can sync the data. I have been following the discussion and comments at

Here are the steps from my adventures with syncing my fitbit using my Fedora 17 system...

1. get the source code

2. try compiling... discover a number of -devel packages that I needed to install

3. hit the wall mentioned in other comments... the need to update mxml to 2.7 when the package is not built for Fedora 17

4. grab the mxml-2.5 SRPM from fedora and the mxml 2.7 source tarball from:
http://www.minixml.org/software.php

5. review the fedora patches to 2.5... concur with other comments that patch1 is already implemented upstream and can be removed from the SPEC file. Recreated the patch0 for no-rpath - trusting there is a reason for this...  And, finally, updated the SPEC file (version, release, changelog), build the packages, and install.  Easy.

6. Once I had all the -devel packages I needed installed and the mxml updated, the fitbit source compiled and installed easily.


There is a reporting issue though - the basic steps, floors, etc get reported but they are missing timestamps so the graphs no longer work and you cannot record activities including sleep.  Apparently it used to work and now it doesn't.  There were changes on the FitBit end around the end of August. I was hoping the data would resync the past 7 days when I got home and put the base back on the windows box but no luck.

I have wanted for some time to learn more about Fedora Packaging and this could be a package set I am willing to maintain...  if the timestamp issue gets resolved.  It is not worth it without that fix.  There are several components to the source that I expect to have to split to multiple packages to meet the Fedora guidelines but the only licensing info I see is a GPL3 so that looks good.

The other potential "project" is to use this device as an example in security training. The device needs a udev rule for dbus communication and the sample is very wide open. I have not scanned yet, but among my research for a linux client, i learned the itt apparently sends much data plain text. And what about containing the daemon in its own SELinux context?  That would be fun too.

I am looking forward to the "coming soon" android app to go with my "shipping late Oct" FitBit One as a replacement.  The only bluetooth 4.0 device I have is an android so I have to wait on that software but then I will finally be able to turn that win box back off.  I use the win box only for syncing the fitbit and backing up the ipad.

I had the opportunity to attend the Grace Hopper Celebration Open Source Day this year in Baltimore.


I was originally planning to check out the Kids on Computers project but ended up working with the Shared Learning Collaborative.

There is a community project blog entry about our work and also about the event in general.  To get involved in the community project take a look at the Getting Started section of the http://dev.slcedu.org site.  We spent the day working through these instructions and fixing errors as well as clarifying instructions.  Hopefully when the instructions are used at the next SLC Camp the process will go smoother for all the new contributors.

I also represented Fedora while there, wearing my Ambassador shirt, handing out a couple of USB keys, and answering several questions while we worked on the SLC project.  There were many MACs at the table in addition to several MS boxes but I think I was the only one with a Linux laptop.  Plenty use *nix elsewhere though.

I have attended other unconferences and hack-a-thons; I have worked on technical projects as the only female; I have worked on mostly female teams outside of technology.  I have not figured out how to describe it but it was different to work on a technology project with all women.  The way the brain works to tackle problems, the amount of thinking aloud that gets done, the way everyone jumps to help each other out...  I have seen this done in all types of groups yet somehow for me it still felt new and different than what I generally experience.  I work with some great people.  Now I have even more great people to work with.

I really hope I can carve out the time to make some additional contributions to this project.  One of the pilot school districts is less than an hour from my home and I am looking forward to the NC SLC Camp. It will be a chance to meet some of the local users and contributors.

On Thursday Sept 13, 2012 my next door neighbor and his friend were killed in a plane crash in Colorado.  They were on their way to the Reno Air show to fullfill a bucket list item.

The neighborhood looks out for each other, is friendly when out and about, and is supportive in any needs but most of use live in the county for the privacy so even after more than 5 years, I never really got to know Dr Dalton all that well.

Dr Dalton (I never got comfortable calling him Bruce since I am the same as his kids and I refuse to grow up enough to address my parent's peers with anything other than titles) was a fun guy.  He always had a smile and big wave.  Even after several years I was always amazed and inspired each time I went out in the morning and saw his canes leaning against the mounting block and realized he was out riding with his wife.

It only takes a few minutes of interaction to realize the spirit and strength he had.  Nine years ago - a few years before I met him - he crashed his ultralight MONI-1 and crushed both ankles among other injuries which eventually resulted in amputation at the knee on one leg. [Based on another conversation we had, I think a partial hip replacement on the other leg was also related to injuries from that accident and also occurred before I met him.]  I remember one of the first times I talked to him he was so excited about finally being able to walk - with his new prosthetic and a pair of walking sticks - all the way to the mailbox. He had a cell phone in his pocket in case he needed a ride home.  The mailbox is 0.8 miles downhill from the house and after the accident he was told he may not ever walk again.  He had been gradually walking further and further and now he could finally turn that exercise into a an errand of getting the mail. He also returned to horseback riding and snow skiing and of course flying.

Just a couple of weeks before he died, we had a long conversation.  He had just returned from a trip to Switzerland and I asked how the trip went.  They had wonderful weather and he got to go in a glider over the alps.  I learned that through family connections they had a regular place they went to and I was encouraged to come see pictures some time.  Somehow the conversation moved from summer activities to skiing and I heard the the story of when he first went skiing after the hip replacement (this is also when I learned about the hip replacement that was a partial instead of a full so he could get back to riding sooner).  On the first attempt his right leg went right and his left leg went straight and he fell.  This was repeated a few times.  The person with him was a physical therapist and looked at him and said "Wow, your doctor is good.  Those falls should have dislocated that hip by now."  Apparently with a hip replacement they rotate the leg out a bit to help keep it in the socket. Not to be deterred, Dr Dalton took the skis down to the shop and had them adjust the bindings askew so that with his new "natural" position that ski stayed straight.

An abbreviated version of that story made its way into the memorial service. Along with a few other stories of similar determination and character.  I learned that he taught his wife to ski when they were dating and laughed since I grew up hearing about my Dad teaching my Mom to ski when they were dating.  I learned that he snores - particularly when camping under a plane wing at Oshkosh. I heard stories of his life as a retired Army colonel, a pediatrician and occupational health consultant, a Joint Master with Red Mountain Hounds, and a volunteer with Angel Flight. He was very active with his family, friends, church, and community.

His wife walks a lot and we pass each other in opposite directions regularly but in the past three weeks we have walked together and talked more (about horses mostly) than all the years since I moved to the neighborhood.

Love and appreciate your friends and family.  You never know when your life will suddenly change and someone will be gone.

Here are a couple of the articles about the accident:
Daily Tar Heel, Sept 20, 2012
Durham Herald Sun Sept 2012

I have finally gotten back to going for a regular walk.  Along the way I keep running into fun or interesting critters.

I would love to take some nature shots with my SLR but if I carry that looking for critters I wont get the heart rate exercise I am looking for and when I go for an exercise walk I do not want to carry the SLR.

Meanwhile, here are some shots from my phone. Click on each for a larger version.

July 4th: Family of skunks - I did not want to get too close but zoom in on the white spot in the middle and you might pick them out: 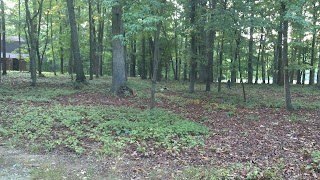 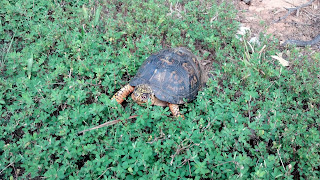 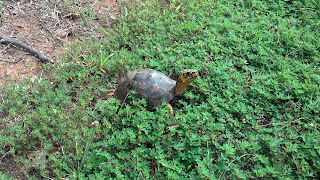 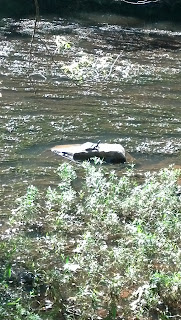 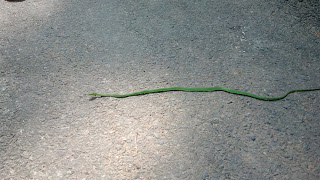 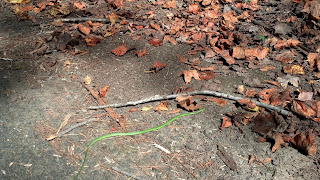 Has it really been almost two years since I posted?  Wow!  I guess it is time to return to storytelling.

For starters: My Fedora upgrade from F15 to F17 using preupgrade was easy, fast, and as far as I can tell flawless. To all the teams involved: Nice job and thank you!

Next up on my travel schedule is Red Hat Summit.  My agenda includes: