Walking home from the neighbors tonight (May 27, 2017) I spotted a beautiful box turtle laying eggs.  It is near the woods but in the sun. Unfortunately it is also a path well traveled by my family.

I returned and took some photos. I used the longer lens in hopes of minimizing any disturbance and I hope that she finished what she was doing.  When I checked a little later she had moved off the nest but I couldn't tell if she had already started to cover eggs or had moved away without laying any. It was just barely dusk so a little early to be done but who knows.

I will look for the nest in the morning and mark the spot so we walk around. Of course even then, survival is highly unlikely with all the snakes, coons, possums, and coyotes in the neighborhood.

I am not sure if this is the same one I saw in the backyard last weekend.

Meanwhile here are some photos. 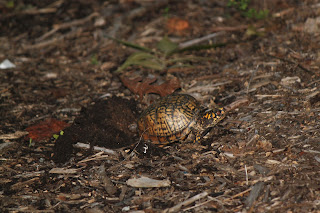 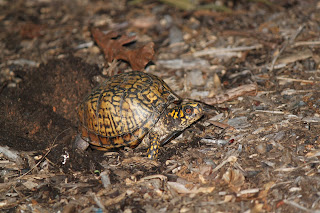 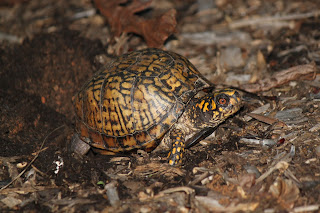 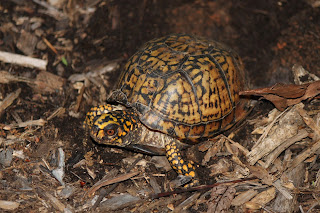 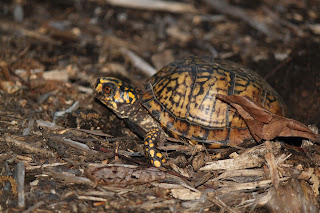 She may have been looking to use some of the warmth from the carport but the dirt is pretty hard any closer.  Even where she selected, I suspect she was only able to dig the hole today because of how much rain we have had lately.  If the little ones survive, they may have to go further than expected to find water. 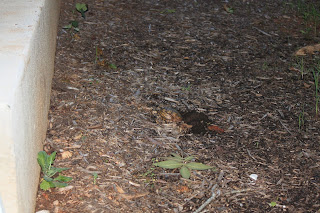 A quick recap with self reminders of session links.

Sunday night was dinner with a couple of other instructors. Always a blast.

Monday night was the Ansible (Red Hat Management) Social. The venue (Coppersmith) was really cool. Their description is as a vintage warehouse but it looked to me like it had once been a firehouse.  The kitchen was in a pair of old food trucks welded together. And there was draft cider.

Tuesday was the start of the main activities. It was great to see the community groups in the center of things instead of a separate room like recent years. Also Training and Certification had various booths on the main floor instead of upstairs by the labs. For the print your own shirt, they added a RHCP option but I stuck with the skyline. I have enough other items with the RHCP logo on it.

I am not a fan of conferences in the Seaport district - the hotel and food options (for me and my allergies) are not as good as the older parts of town - but I understand the event the outgrown the Hynes. The extra room did result in a more spread out expo hall that actually appeared smaller than past years. Lines for sessions were also a bit smaller. I never heard the full numbers but I got the impression there was lower attendance as well. I also did not hear as much of an international flavor as previous year.

Tuesday evening I made an appearance at the Containers and Cloud party at Legal Test Kitchen (yummy shrimp!) before heading over to the RHCP party at Harpoon Brewery. They also had a draft craft cider.

Wednesday night we bailed on the Red Sox game. It was cold and windy and I wasn't sure what I would be able to eat. We went to Legal Seafood (again) and made it an early night. On Thursday at Summit I was able to pick up the ball caps with the Fenway logo on them.  There were a couple of other Boston themed giveaways on the expo floor that I was able to score on the final day as well. Specifically, a really nice glass with a Boston map.

The plane up on Saturday morning was about 1/3 hatters and the Friday morning plane home was more like half hatters.  We were all ready to sleep for the weekend.  I did a lot more hallway track this year than in the past but I did catch a few security related sessions.

Sessions:
Keynotes and general sessions were live streamed and are available on the Red Hat Summit YouTube channel.

Red Hat Security Roadmap included some information on upstream projects that Red Hat is focusing on and contributing to including TPM (2.0 and virtual), PKCS#11, NBDE, USB Guard. They also mentioned the ongoing work with OpenSCAP and a new site for container health index.

The Fury and the Sound: A mock disaster security vulnerability fable was a fun panel type presentation which walked through a mock vulnerability with reps from project managements, infosec, exec office, and IT.