When, where, and why

I learned about network operating systems working in a person computer (PC) helpcenter. After several years talking to customers and being an escalation point for other support engineers, I moved into the training department.

I was responsible for training the technicians using both in house written materials for our own hardware products and partner materials for most of the software. When I started working with Linux, I was already teaching official material for OS/2 Warp Server and SCO Unix in additional to some material for Microsoft, Banyan Systems, and Novell products.

When IBM invested in Linux, my position in a training department and my Unix background made me a lead on the team facilitating a plan to get the PC Helpcenters around the world up to speed in supporting four Linux distributions. We needed to quickly ramp up on Red Hat, Caldera, SUSE, and TurboLinux. I became the point person for Train-the-Trainer sessions on all four distributions in addition to having the responsibility of getting the North America support center trained.

The Red Hat office, with their brand new Training and Certification team, was located halfway between my office and my home so of course I started by attending their Red Hat Certified Engineer course. That was 20 years ago. To be precise, it was Mar 1-5, 1999. 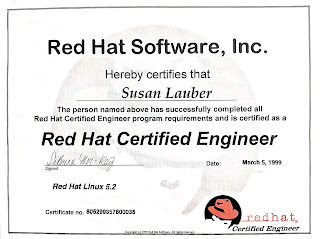 The course was similar to other technical training course which I had attended and taught. The RH300 RHCE Course was new and it was the only course offered at the time. In those years, the authors and the instructors were the same people.

It was a lot of information for a single week and it required a good foundation of prerequisite knowledge. Some things have not changed in 20 years!

I could not find the course or exam descriptions from 1999 but the Internet Archives Way Back Machine does show the spring of 2000 Prep Guide: https://web.archive.org/web/20000407183013/http://www.redhat.com/services/training/training_examprep.html

My memory is that most items did not change much in that first year.

Like now, the the exam was on that Friday. It was mostly hands on but not entirely since the first iteration included a multiple choice section. It was three parts:


I think my class did the installation in the morning with debug in the afternoon. The written section was in between followed by a lunch break. Soon after, the lab sections were swapped out in the daily schedule. I suspect it was quicker to grade the debug than the installation lab and systems needed to be reset for each section. My class did not need a reset since we took the exam on zip drives. Yup, you heard that correctly, ZIP drives. They were removed, labeled, and graded later. The email with my score report is dated March 19th. Two weeks later! 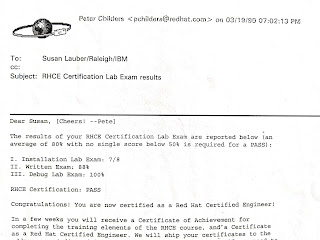 
Of course at that time, it was network-scripts files, ext2, NIS, LILO, rpm, squid, tcp_wrappers, and ipchains instead of the nmcli, xfs, GRUB, yum, systemd, and firewalld.

There were also some "get off my lawn" objectives:

I became a Red Hat Certified Instructor through a partner program and immediately started sharing the wonders of Open Source with a whole new set of users. I added Red Hat Certified Examiner credentials a year later.

The first class I taught using Red Hat Training materials was written for RHL 6.0 and delivered in Scotland. That, though, is a story for another article.
Posted by SML at 8:04 AM 1 comment:

Getting started with Vim visual mode at opensource.com turned out to be very popular.

Fedora IoT Docs are Live for the Fedora Community Blog is a summary report for the majority of my February writing.

A technical reboot, recharge, upgrade, and expansion of the Fedora IoT Documentation took up most of my time and provided an opportunity to spend the dreary month working from home instead of commuting.

Specifically for the Fedora IoT project, I did a lot a reading in the month as well. Here are a few of the items I bookmarked. Some inspired my hacking and writing, some are saved for future adventures:

Getting to Know Fedora Silverblue

How to turn on an LED with Fedora IoT

Turn a Raspberry Pi 3B+ into a PriTunl VPN

Set the holiday mood with your Raspberry Pi